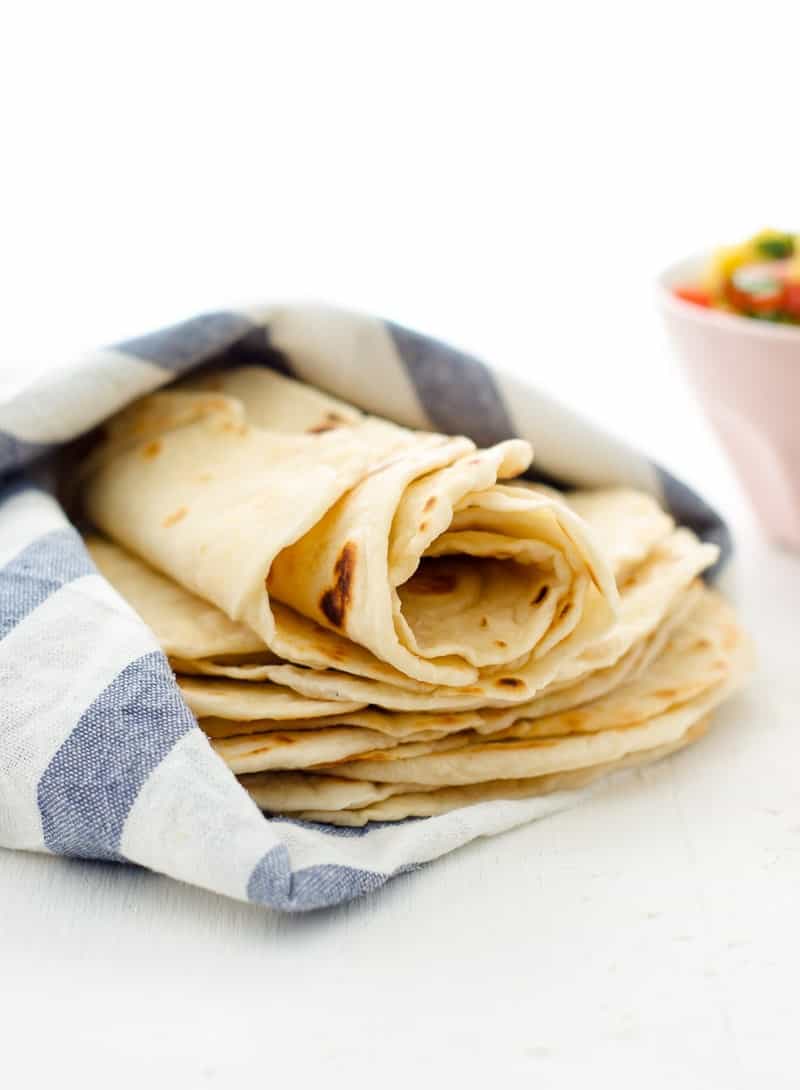 Why Do You Love Lard, Stephanie?

Homemade flour tortillas are great, but you know what makes them super great? Lard. LARD! How many of you cook with lard?! It's the secret to flaky biscuits, tender pie crusts, and you guessed it, the best homemade flour tortillas. Lard's fat crystals are larger than shortening and butter's, so that's why it's able to produce larger flakes in your pies and biscuits!

I know lard has a bad rap, but it really doesn't deserve one. I have all sorts of beef with the food industry, so I'll save my rant for another day, but I found this article super interesting!

So there are two types of lard: The better is naturally-occuring (high quality) lard that is directly rendered from pig fat and must be refrigerated, and then there is industrially-produced lard, which is a mixture of varying qualities of lard and is hydrogenated to make it shelf-stable.

I'm a firm believer in naturally-ocurring fats, such as butter, coconut oil, and yes, lard. While they are high in saturated fats, it is natural fat. Give me natural fat over factory-produced fat any day.

Where Do I Find Lard?

Unfortunately, legit lard can be difficult to find. You can find it at some stores (but not all), butcher shops, farmers' markets, or ethnic grocery stores can be a great place to look. I picked up what you are most-likely to use, snow cap lard off the shelf in the baking aisle.

This is less than $2, looks like shortening, is a lot softer, but works magic. As I was recipe testing, I used shortening until I found the proportions of ingredients I liked. Once I got what I wanted, I traded in the shortening for lard, and HELLO. HELL. O. They were softer, and they actually had flavor. I love you, lard. 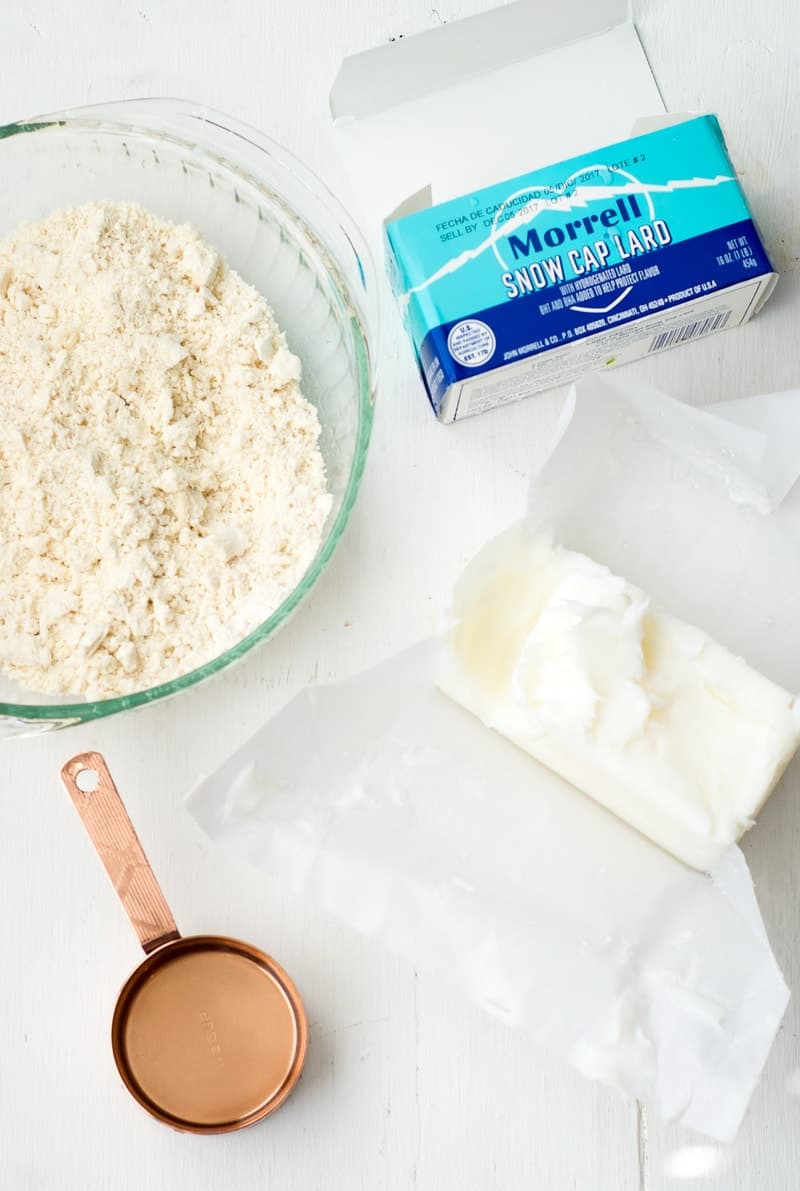 You're going to make your dough and it's going to be really soft and really wet. This is good. DON'T QUESTION ME.

(I wish this worked on my kids) 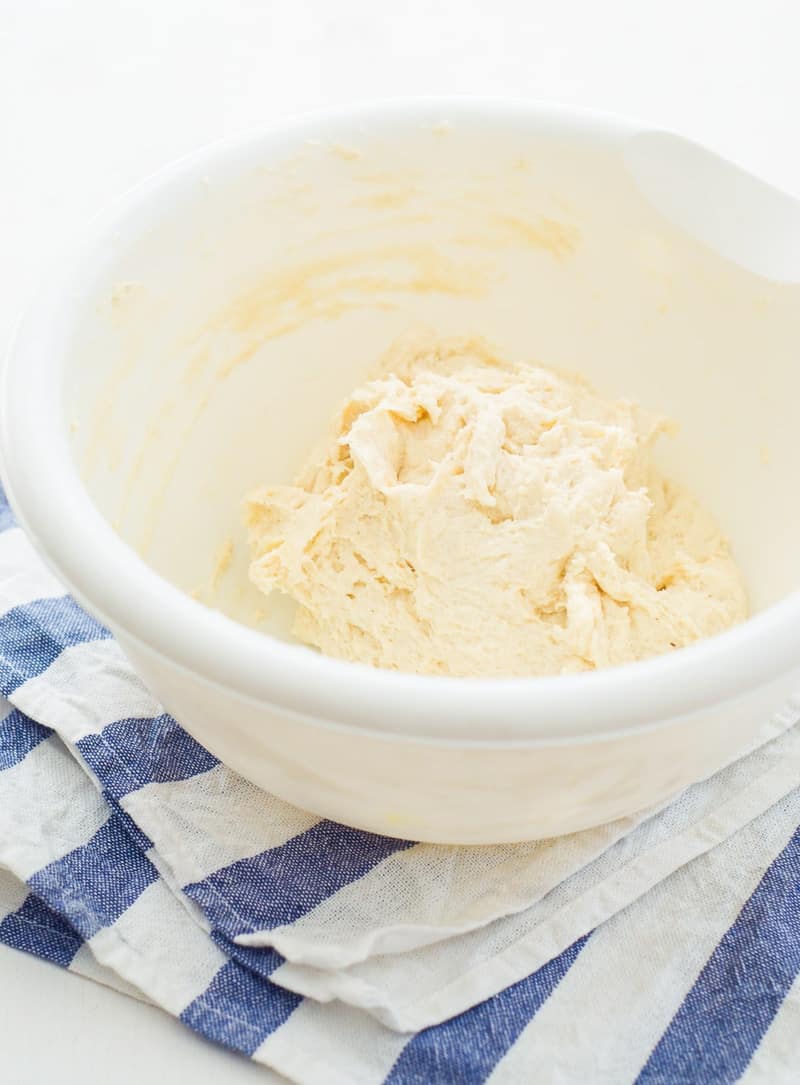 And then you'll wrap it up and let it rest. This will let the flour really absorb all of the liquid and let the gluten relax. You know how you sometimes roll out pie crust or other doughs and it kinda shrinks back? That's because the gluten needs to relax. Just let it rest. If when you do start working with it and it is doing that, you need to let it rest a little longer.

When it's time to roll the tortilla dough out, you want to roll it as thin as you possibly can! I like to separate the dough into little balls and begin to push them out into little rounds, then begin rolling each one out. Cover them with a slightly damp towel while you're waiting to cook them so they don't dry out. 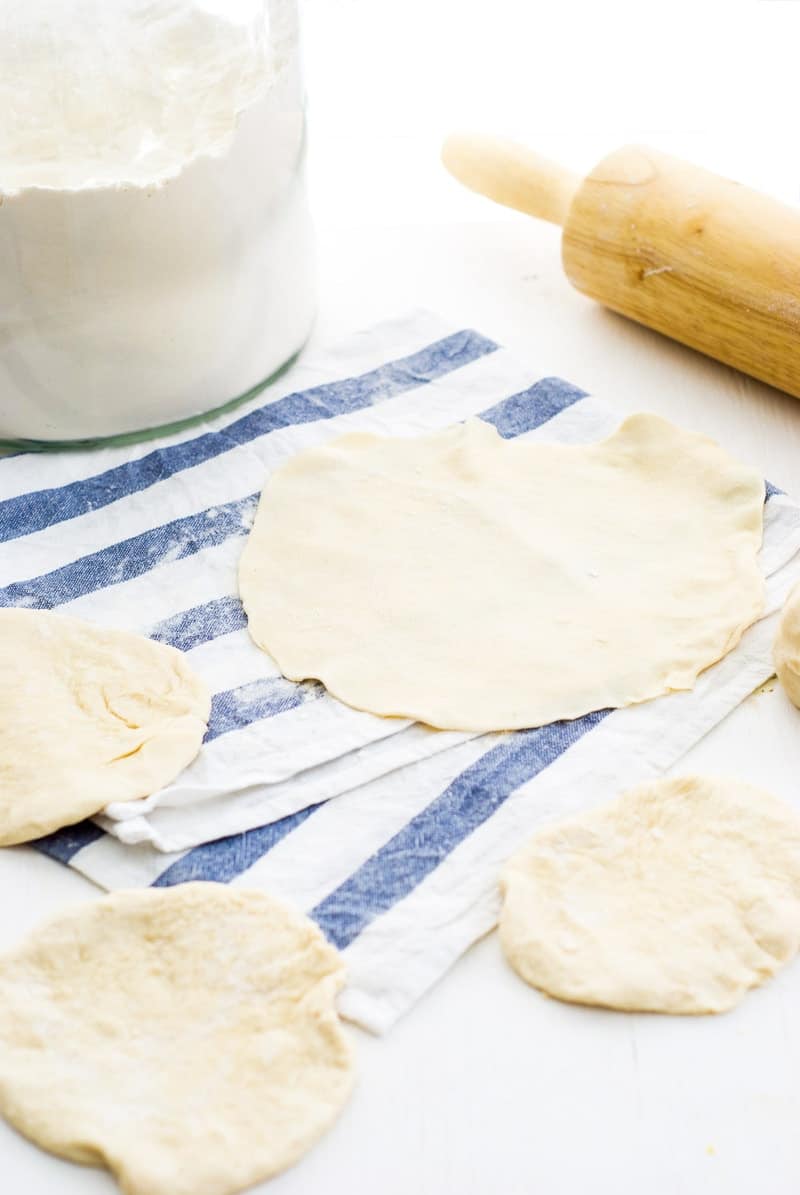 Make your grill HOT. After you lay the tortilla on the griddle, it should start to bubble up tiny bubbles and then larger bubbles within 20-30 seconds. If not, it's not hot enough. The tortillas should only cook about 90-120 seconds each side. After they're done, remove from griddle and keep stacked and wrapped in a clean dish towel. 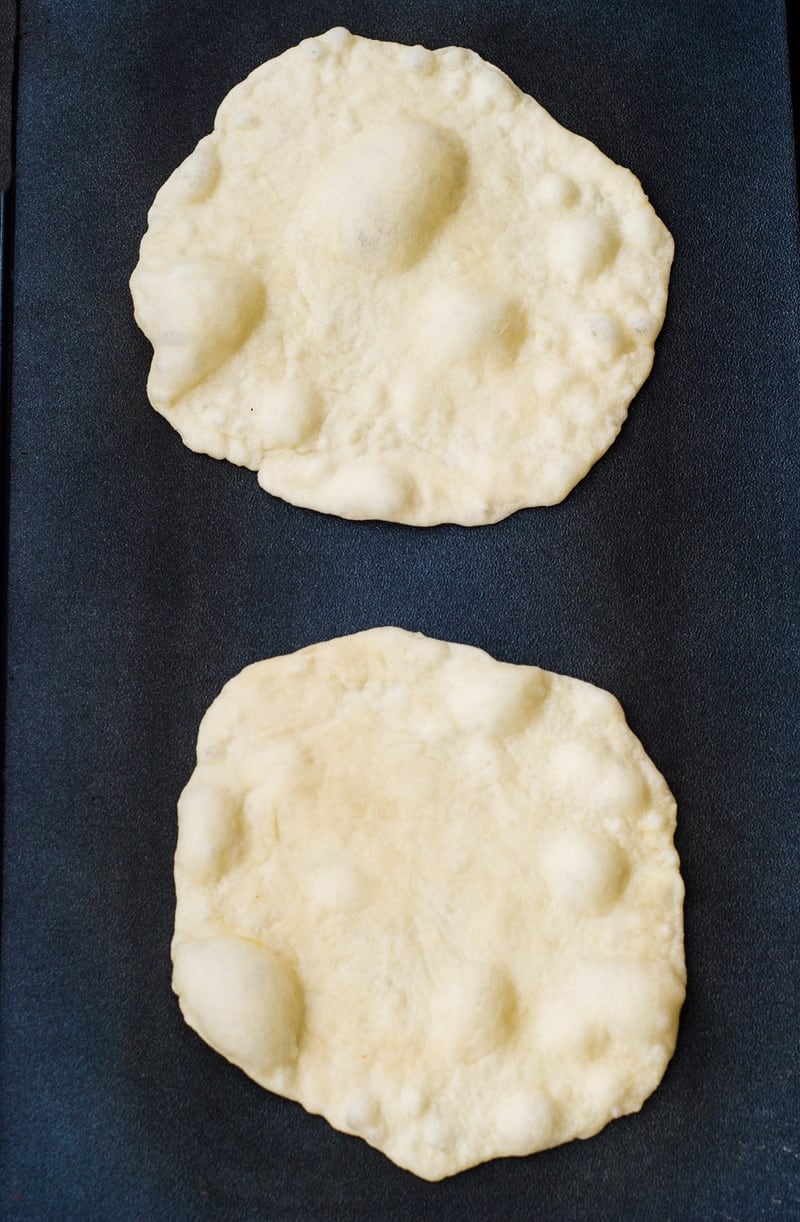 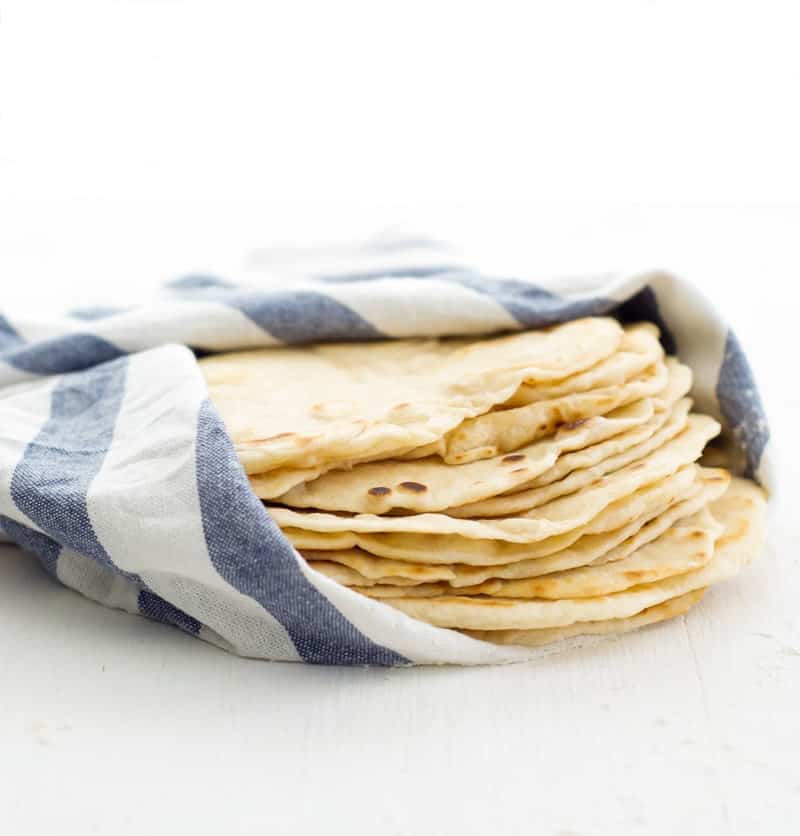 More Recipes To Use These Homemade Flour Tortillas With...

We have ALLLL of the taco recipes!!! Shredded pork with mango salsa, tacos al pastor, chorizo and fried avocado, breakfast tacos, chili lime chicken tacos, Caribbean shrimp tacos with pineapple relish, roasted sweet potato and black bean tacos...while some of those should be made with corn tortillas, lets just all agree that tacos are king. 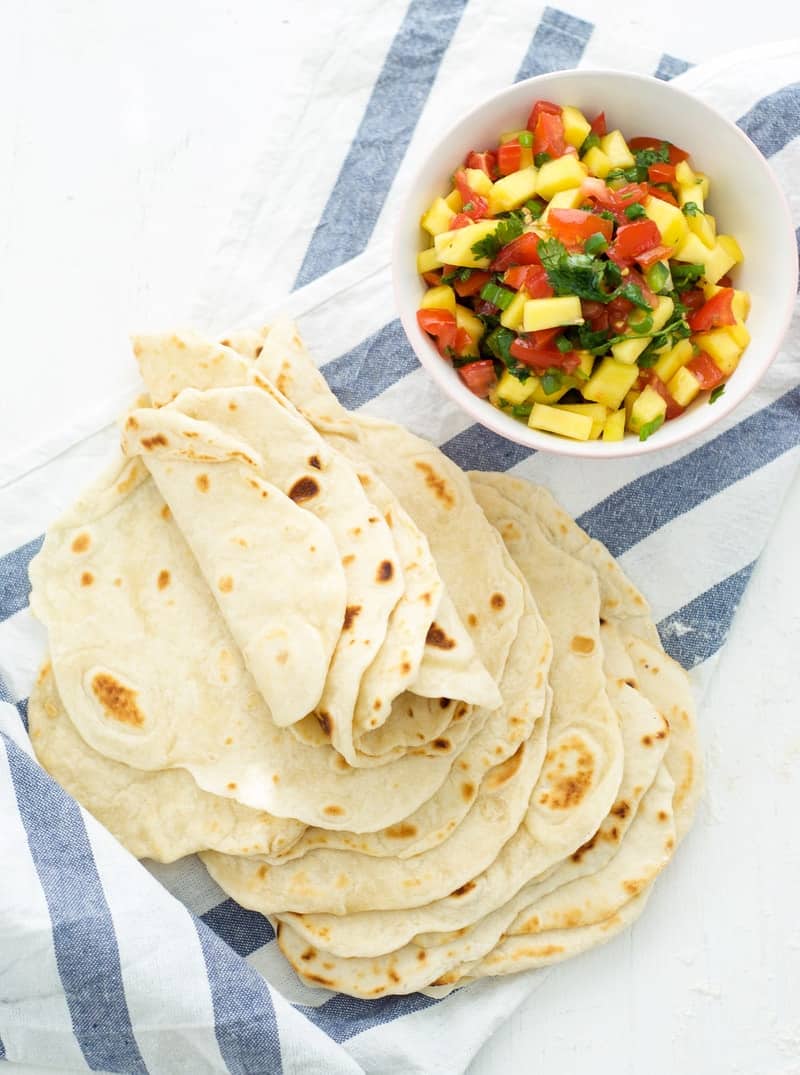 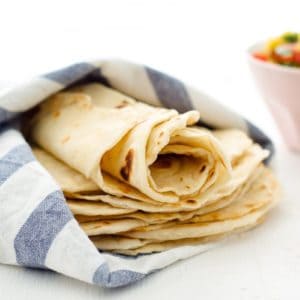