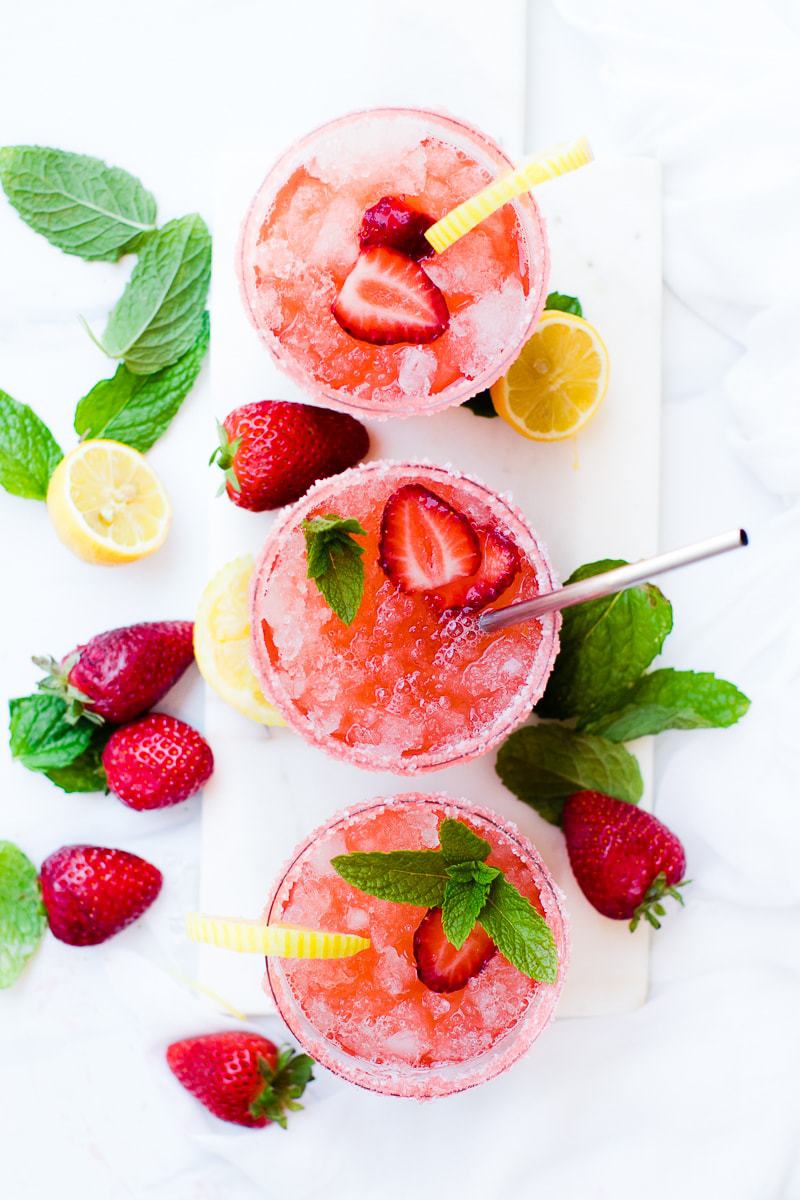 I don’t think there is a kid more obsessed with dinos than mine. Truly. Parker plays, eats, sleeps, and breathes dinosaurs! So when talks of his 5th birthday party began (11 3/4 months ago), we both knew exactly what would be in the works. 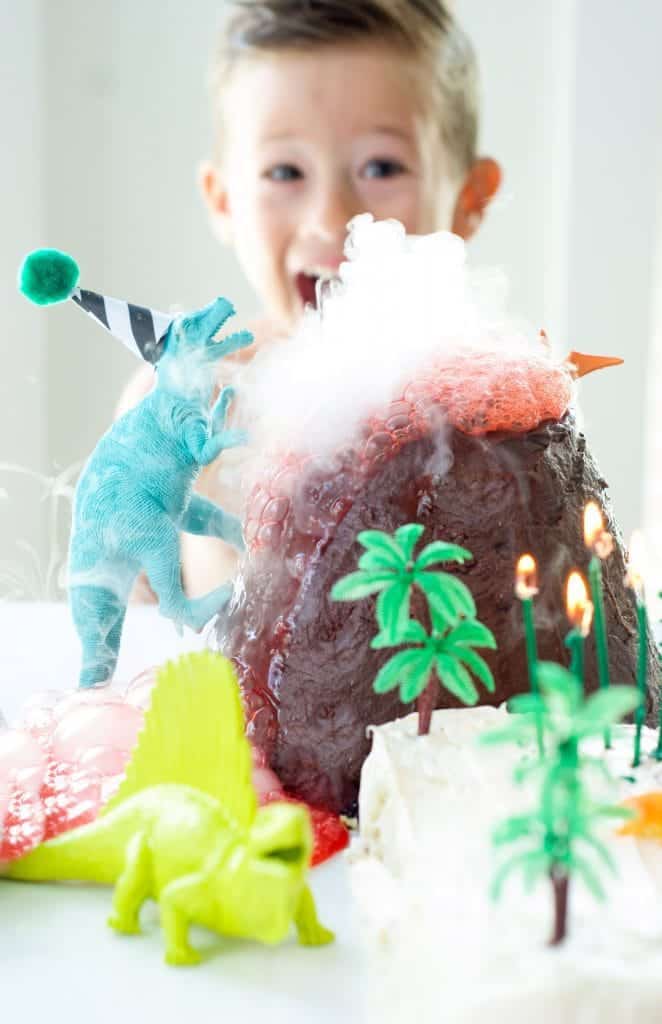 I bought these tiny little dinosaurs for super cheap on Amazon here and thought they’d be perfect atop some simple cupcakes. I also found this green shredded candy “sprinkles” that I used as grass. 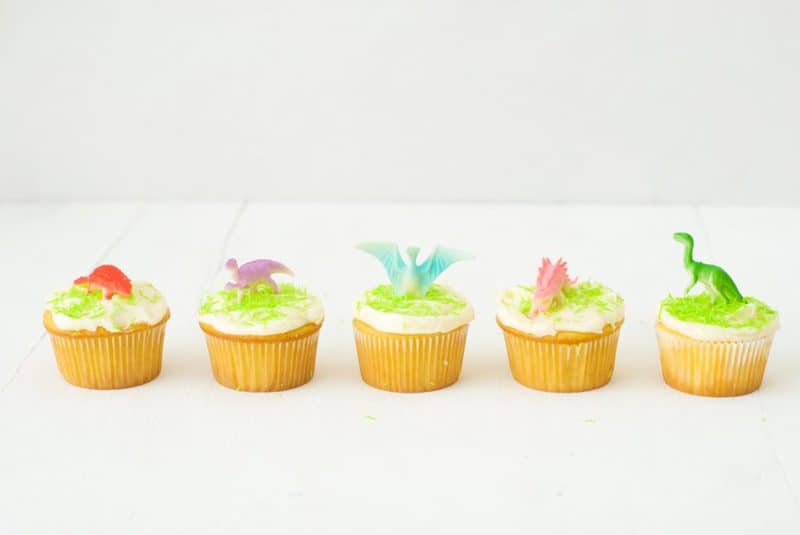 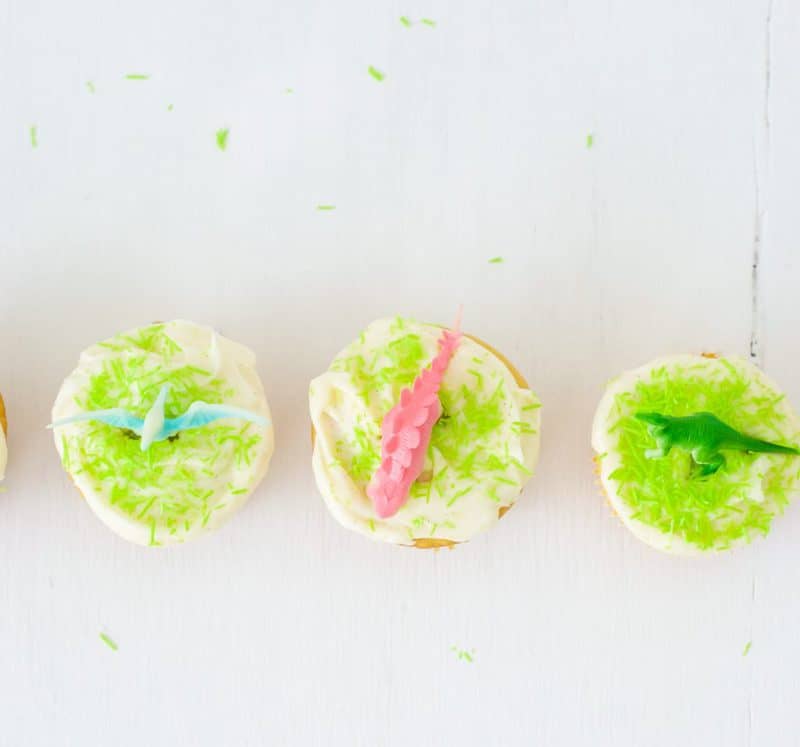 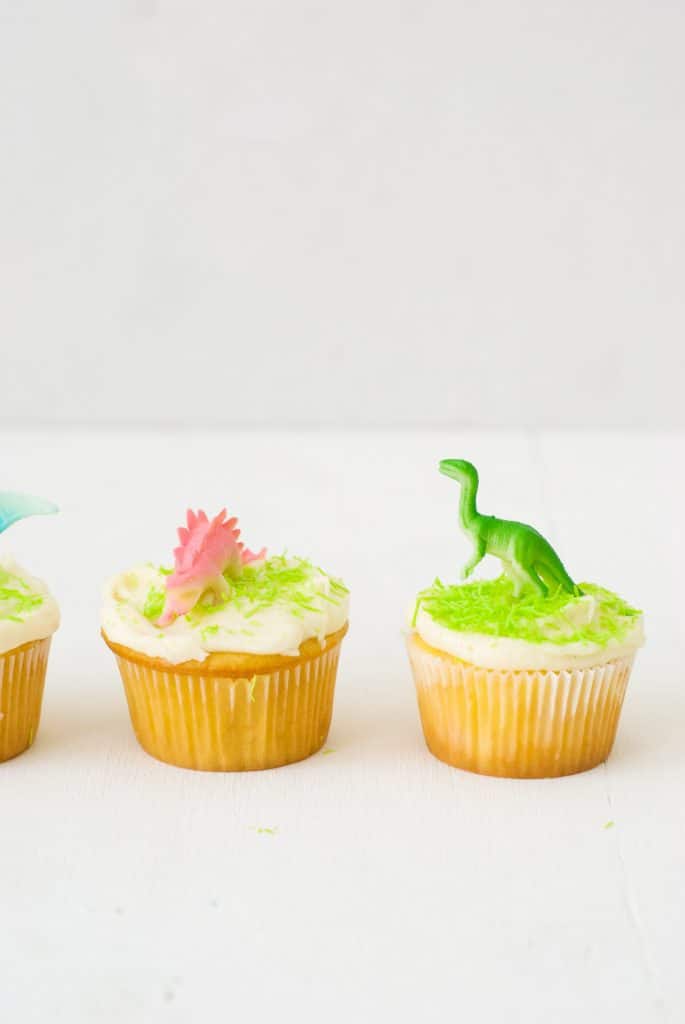 We had 3-feet-tall blow-up dinosaurs, masks for the kids, spray-painted several dinosaurs and made little party hats out of scrapbook paper and pom-poms…then I had to go big for the main attraction. Dinosaur cake, obviously. But lets throw in an exploding volcano, yeah? I started with a mason jar, and built up 1 1/2 batches of rice krispie treats around it into a volcano shape, going slightly over the rim of the mason jar. I let it sit out overnight to really harden. 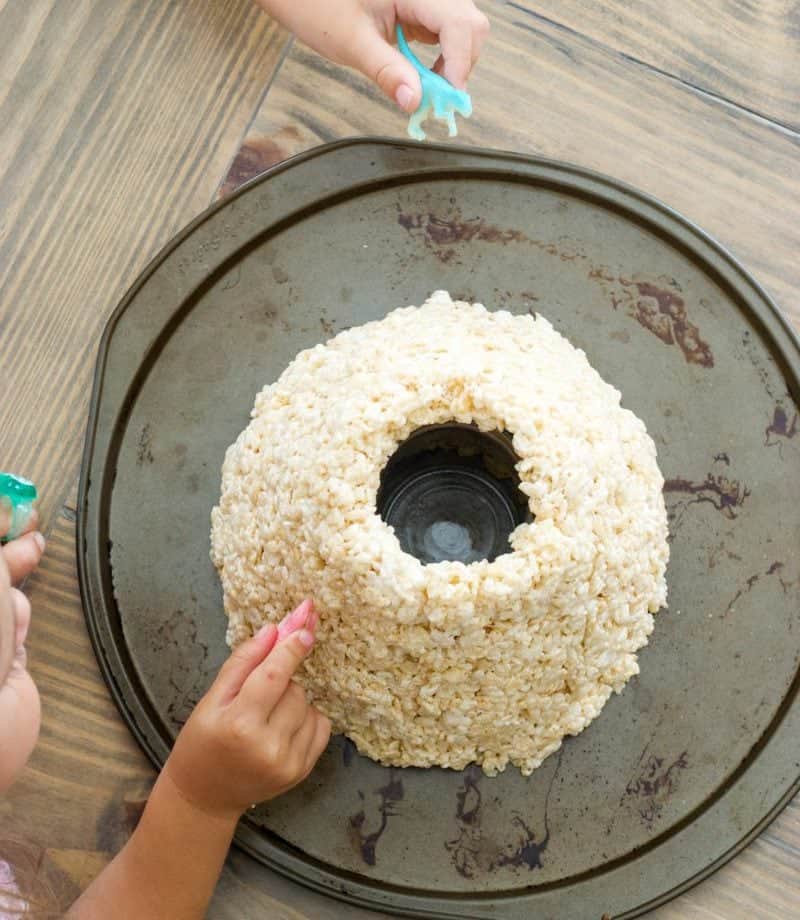 The next day (party day), I used 2 tubs of chocolate icing and iced that baby. I have a large square piece of wood that I’ve painted white and use for food photography. I bought two 9×13 cake boards from Michael’s and placed them side-by-side on my wood board. Kept the cake and my board clean, and the best part is that it wiped clean with a rag! I set the volcano in one corner, and then placed my three 8×8 cake squares around it. Frosted them all with white icing to create one L-shaped cake surrounding the volcano. I wanted to keep the volcano separate from the cake because I knew that if I had placed the volcano on top of the cake, the jello lava would be all over the cake that we would be serving the adults. I spray-pained some of the mini dinosaurs I bought, added some palm trees (after snipping off the round bases), and called it good! 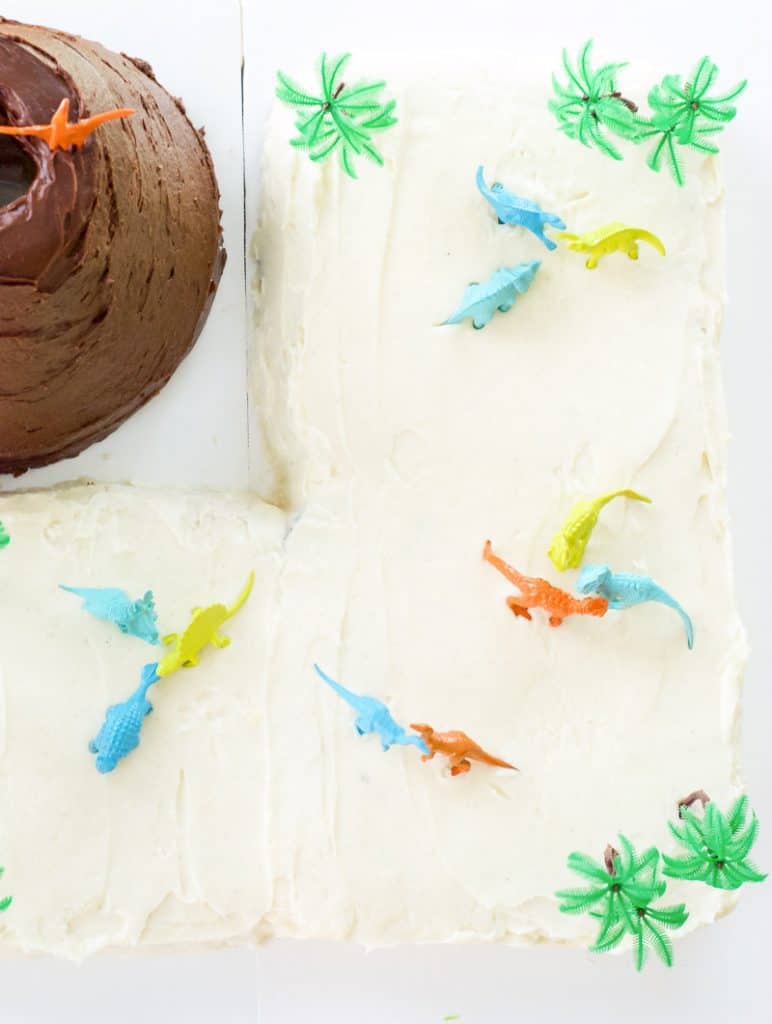 How To Make Your Cake Explode

I wanted a legit lava explosion instead of just smoke from dry ice. I found the idea to use red jello here, and I gotta say, it was genius. You prepare red jello as directed up until the point where you chill it in the refrigerator. Morning of, I picked up some small pieces of dry ice from my local grocery store, thinking I wouldn’t need much, and placed it in the freezer of the clubhouse. We go through most of our party, everyone ate, went out to swim at our pool, and then all of the parents gather their kids in for the exciting exploding volcano cake. I run to grab the jello liquid and dry ice, open the freezer and pull out the bag of dry ice…..to find them empty. Empty. No exploding volcano when I had promised everyone the exploding volcano. We did the birthday candles and the song, and afterwards, my Parker said quietly, “Awww, I wanted the exploding volcano…”. I was crushed.

The next day I went and got a huge block of dry ice and we did the exploding volcano! Pour the jello liquid into the mason jar. Break the dry ice into cubes with a mallet or hammer, being careful not to handle it with your hands–I used a dishrag. 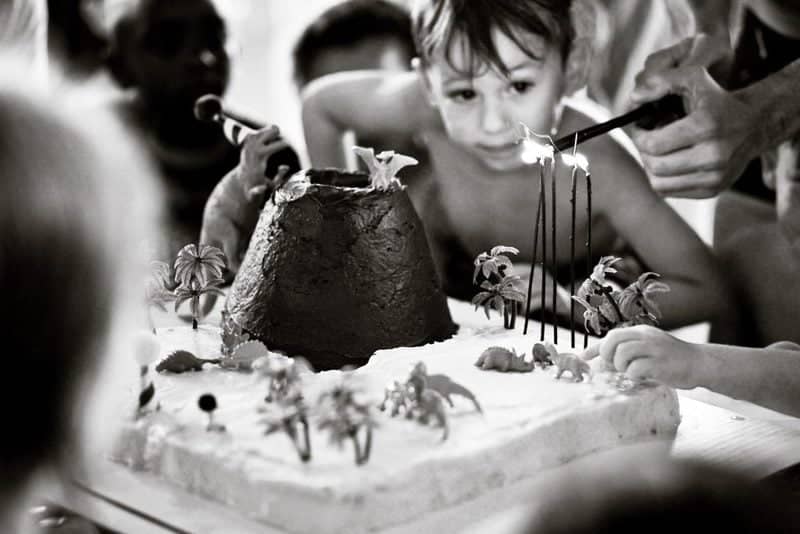 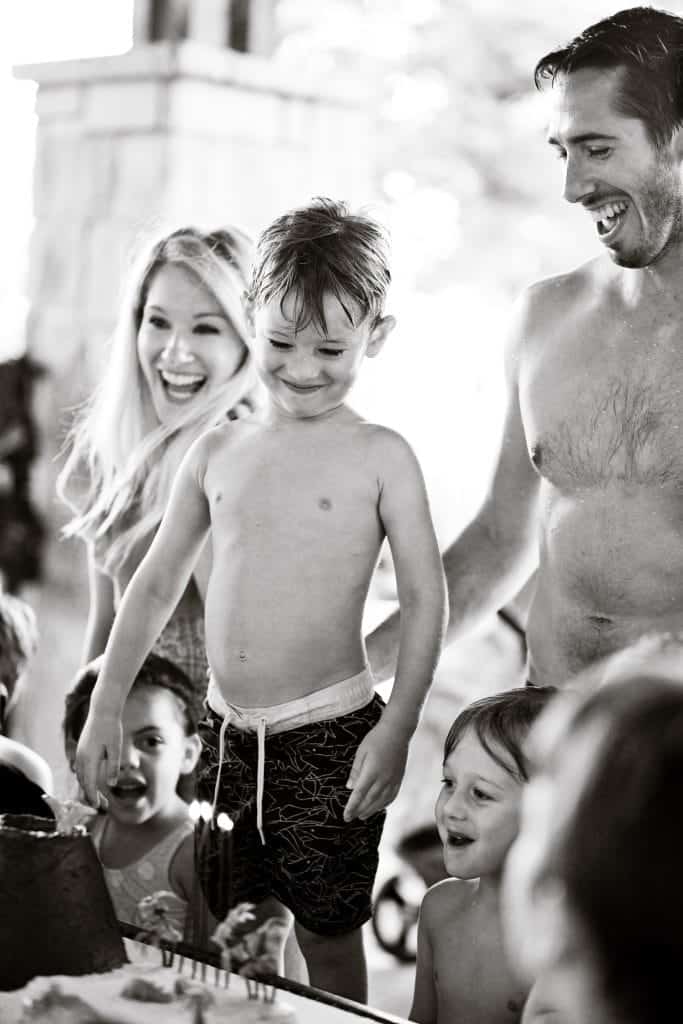 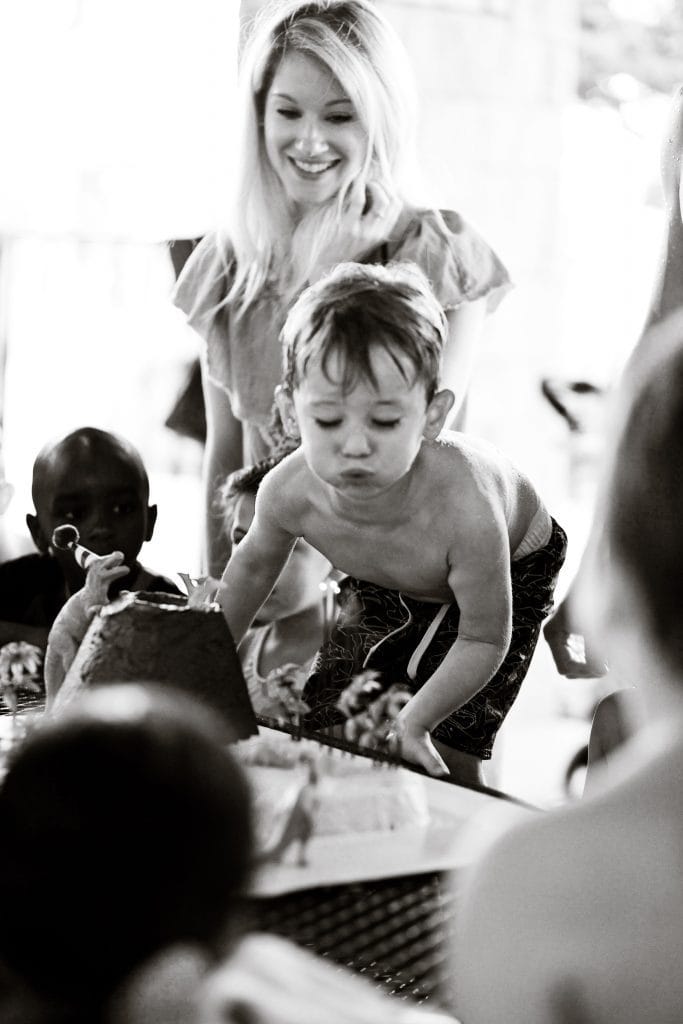 I dropped several cubes (about the size of the mouth of the jar) into the jello liquid. It starts. 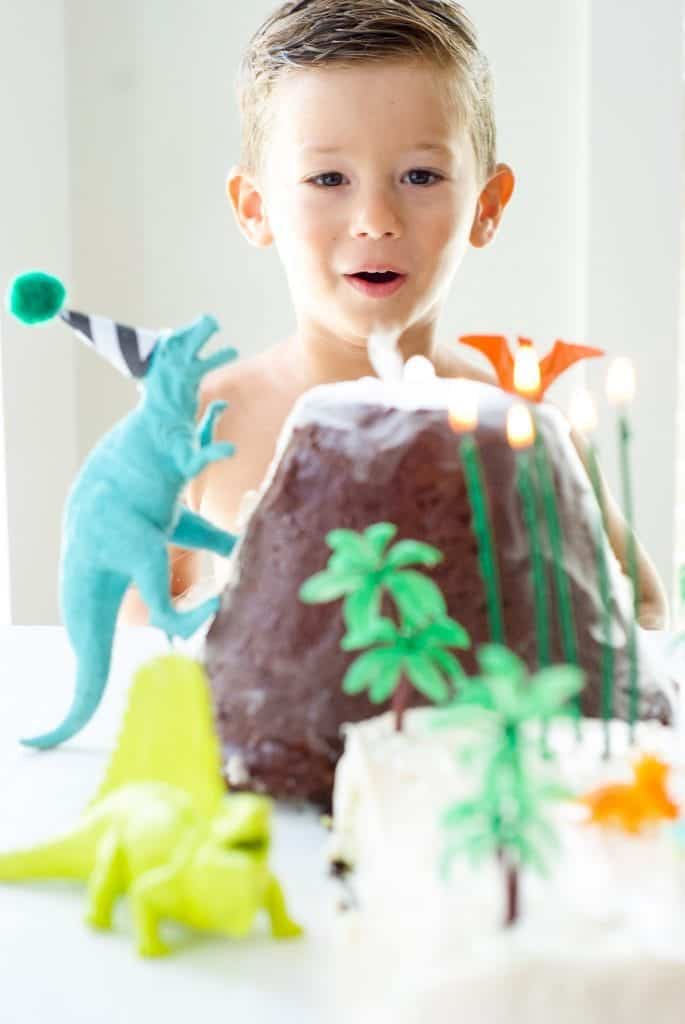 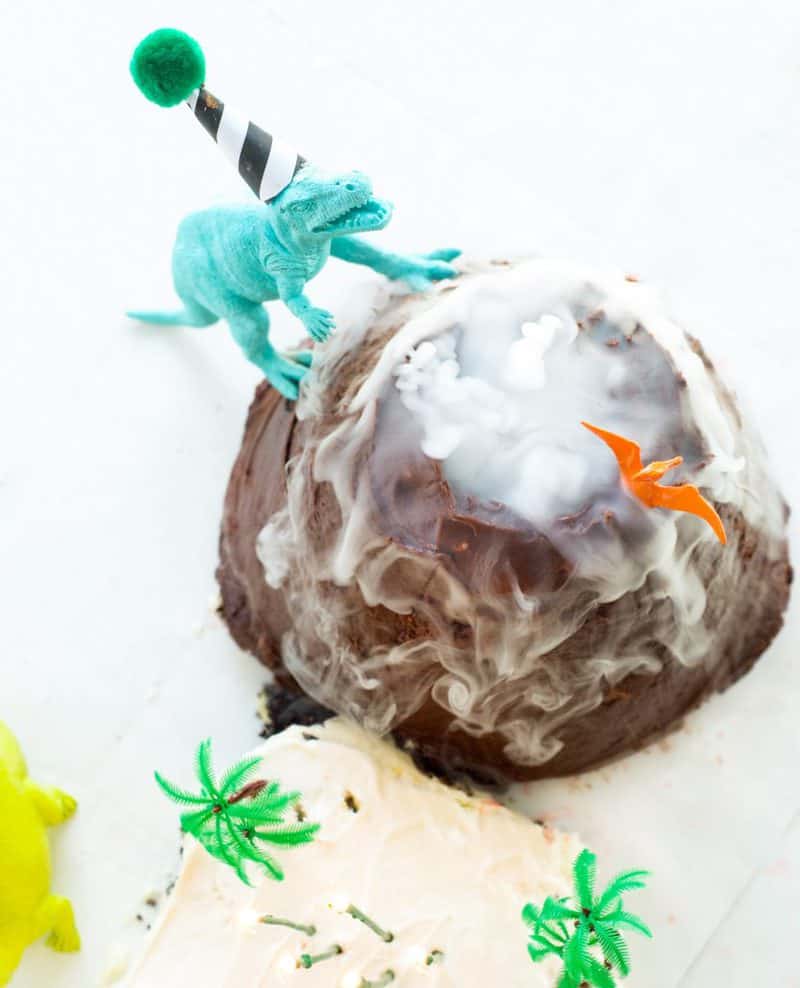 but then it came. And all was well in the eyes of my favorite 5-year-old. Dreams really do come true! 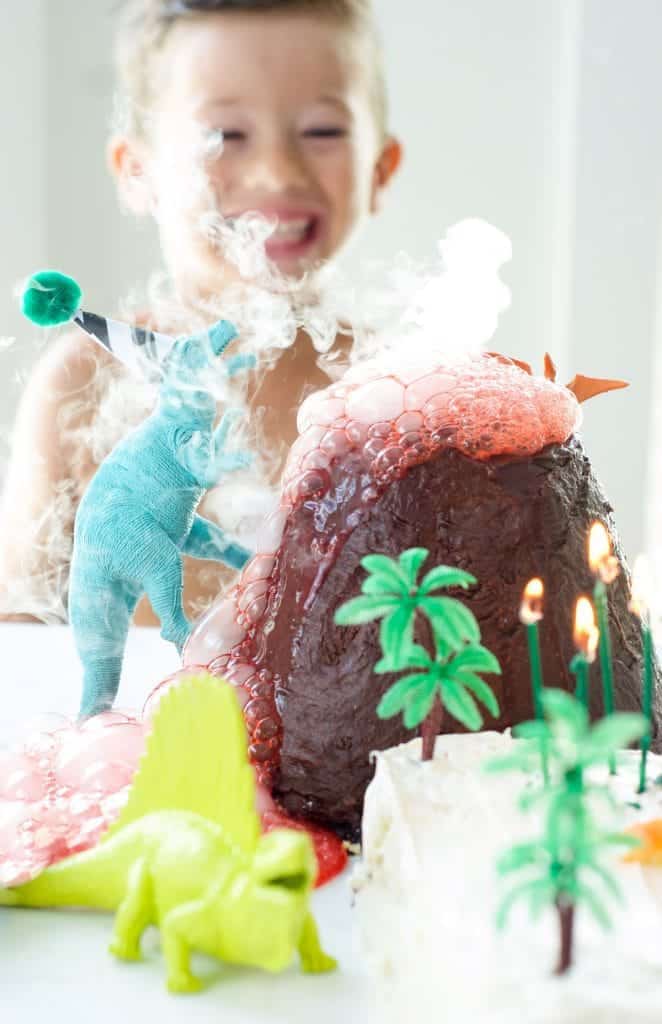 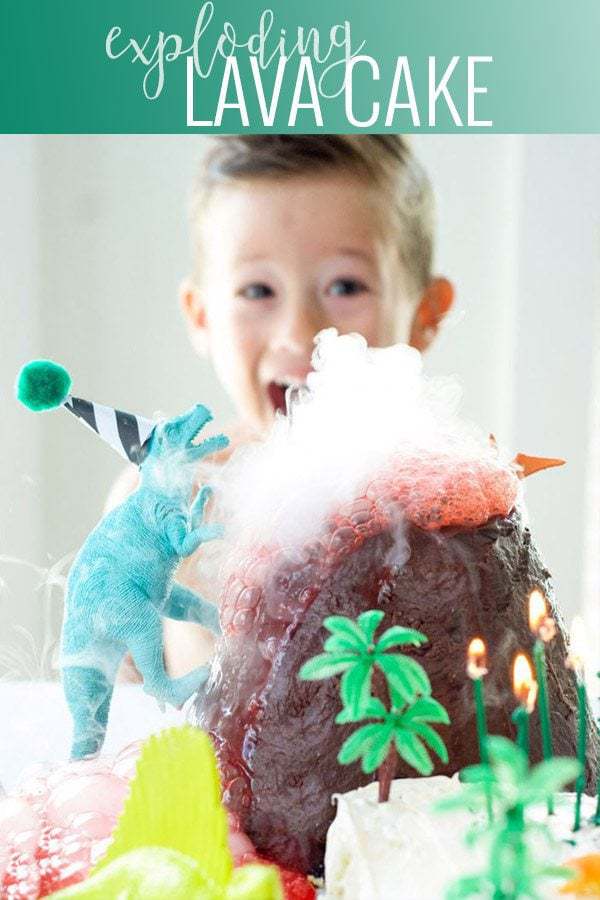