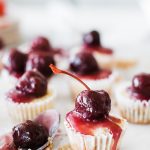 The beauty of these mini cheesecake bites is that you get all the delicious creaminess and cheesecake cravings fulfilling in a small perfect bite. They take a FRACTION of the time to make, much harder to mess up and basically a big fan favorite.
Prep Time10 mins
Cook Time10 mins
Total Time20 mins
Course: Dessert
Cuisine: American
Servings: 36 servings
Calories: 76kcal
Author: Kadee & Desarae

CAN I USE A DIFFERENT CRACKER FOR THE CRUST?

YES! switch up your crust and make these mini cheesecake bites uniquely YOU. I've tried

HOW DO I ADJUST THE RECIPE IF USING A DIFFERENT COOKIE?

I didn't. I still mixed my crumbs with the same amount of butter and sugar. If your cookie seems like its more sweet than a graham cracker you can use your discretion and use less sugar.